Предыдущая публикация: The Paradox of Death.

As it is through his death that he conquered death,
Christ has changed the “use” of death for all men and women throughout time.

As St Maximus the Confessor put it,

“When willingly submitting to the condemnation imposed on our passibility [that is, our passive subjection to suffering], he turned that very passibility into an instrument for eradicating sin and the death which is its consequence.”

“another beginning and a second birth (genesis) for human nature, which through the vehicle of suffering, ends in the pleasure of the life to come.”

St Maximus says that by reaching out for pleasure without undergoing any prior labor or suffering, Adam introduced a form of pleasure that, in fact, culminates in pain:
eating for the sake of the pleasure of eating leads to gluttony,
an addiction to eating which produces pain
when one can’t soothe oneself by eating;
and, likewise, for all our other supposed “pleasures.”

Yet this is a pain which is also educational,
for it prompts us to reconsider how we relate to pleasure.

On the other hand, by voluntarily undergoing the passion, the suffering of death
—a death to which he was not liable, for no sin was to be found in him—
Christ has turned this vicious cycle inside-out,
making death the beginning of new life.

According to St Maximus:

“Death, once it has ceased having pleasure as its birth-mother
—that pleasure for which death itself became the natural punishment—clearly becomes the father of everlasting life.”

In this way, St Maximus continues, Christ has “converted the use of death,” so that
“the baptized acquires the use of death to condemn sin,
which in turn mystically leads that person to divine and unending life.”

Rather than being passive and frustrated, victims of death
and of the givenness of our mortality,
in Christ we can freely and actively “use death,”
in St Maximus’ striking phrase.

And in so doing, we will transcend the limitations of the life into which we have been born,
in which we have found ourselves through no choice of our own
—the “existence” in which, whatever we do, we die.

In and through Christ, we now have the possibility of freely using the givenness of our mortality to be reborn, by choice,
so coming to be in a life without end.

Only now does freedom—not necessity—become the basis
for a truly human existence in Christ.
This is a new existence, beginning with an act of freedom—that of Christ voluntarily going to his Passion, “converting the use of death” for all—
and in this way, enabling us also to start over—freely—by following him.

This begins sacramentally, once and for all in baptism,
where the baptized commit themselves to dying to Adam and to living in Christ, being
“born from above … from the water and the Spirit” (John 3:3, 5).
And it is continued or renewed, thereafter, throughout the whole of life by “taking up the cross and following” Christ (Matt 16:24).

This baptismal life is nourished by the Body and the Blood of Christ, himself,
continuing to participate in the broken bread,
as with the disciples on the road to Emmaus,
and in so doing, “proclaiming his death until he comes” (1 Cor 11:26).

And, as Adam was “a type of the one to come” (Rom 5:14),
the breath of life which animated him then (Gen 2:7), a breath which will expire,
prefigures the gift of the Spirit given to the baptized as a pledge,
a first taste of the fullness of the life-creating power of the Spirit,
already rendering Christians spiritual, even now,
as they begin to put to death the desires of the flesh
and to begin, instead, to live in the gifts of the Spirit:
love, joy, peace, patience, kindness, goodness, faithfulness, gentleness, and self-control (Gal 5:22–3).

This new “use of death” is not an act of desperation bringing about the end,
or an act of passive submission to victimization, resigning oneself to one’s fate.

It is, rather, the beginning of new life for the baptized and for those around them,
a new mode of existence—“in Christ” rather than “in Adam”—
that is manifest in the baptized.

Yet it is so only to the extent that they actively take up the cross,
that is, no longer live for themselves in an ego-centric, self-centered, mode of life,
but rather live ecstatically, beyond themselves, for their neighbors and for God. 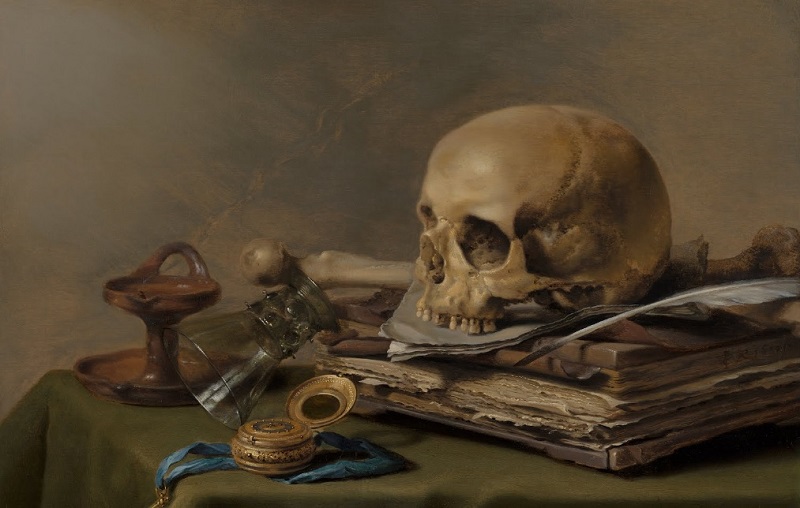 Through Christ’s work, we need no longer be passive victims of the mortality
into which we have been thrown,
for we can now actively “use death”
as the beginning of a new mode of life, a birth into existence as a human being.